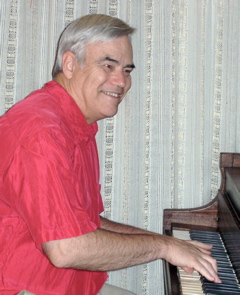 ROBERT BLEY-VROMAN, dance caller and pianist, plays and calls for the O'ahu dances when he is available. He has performed throughout the Southwest,  and in New England, as well as Hawai'i. He is co-editor of the New England Fiddler's Repertoire, 2nd edition, 2003, a best-selling standard collection of traditional dance tunes.

ABBY BROWN, flutes and whistles, is an English as a Second Language educational consultant and materials writer. She also plays with the band Celtic Waves; in her spare time is an acrobat and has performed at local charity events, with the Hawai'i Opera Theater, and in educational and commercial TV programs.

DENNIS SUYEOKA, mandocello, also plays mandolin, mandola, and bouzouki with several Honolulu bands. He owns and operates the Coffeeline Campus Coffeehouse at Atherton YMCA, the only coffeehouse recommended in the Lonely Planet Rough Guide to Hawai'i.

KURT JONES is a traditional violin player, maker and luthier (kurtrjonesviolins.wordpress.com). He has played many genres but decided to focus on Celtic music in 1981. Kurt has played in 8 bands, being a Welsh gypsy, in Alaska, Utah, Montana and Washington.

JOHN KAHLE, guitarist, also performs with The Humbones and with Mark Prados and his Enablers.

Back to Contradancers of Hawai'i Homepage